SANTA CRUZ >> The state’s requirements for the number of homes built in Santa Cruz County will more than quadruple if local leaders approve a draft plan released in April.

State leaders set home building minimums for each region to try to address the state’s housing shortage. The Regional Housing Needs Allocation (RHNA) goals are set for the Monterey Bay region about every eight years.

Santa Cruz County has had one of the most expensive housing markets in the world compared with median incomes. To try to catch up with housing demand and reduce residents’ housing costs across the state, state leaders have tried to boost housing production by setting more aggressive targets.

When areas do not make adequate progress on their housing production goals — which is common — state law allows streamlined approval of some housing projects. City and county leaders then have limited power to change projects under state law SB 35.

The Association of Monterey Bay Governments released the draft Regional Housing Needs Allocation plan in April. Local jurisdictions and the state Department of Housing Community Development have until June 6 to appeal the draft plan.

Approval process and how to participate

The California Department of Housing and Community Development set the Monterey Bay region’s housing targets. The targets are based on estimated population growth and projections about vacancy rates, cost burden and households who live in crowded homes. The Association of Monterey Bay Governments, known as AMBAG, sets the targets for each local jurisdiction.

To submit comments on the draft plan by June 6, email Heather Adamson, the Director of Planning for the Association of Monterey Bay Area Governments, at [email protected] or mail comments to: Heather Adamson, AMBAG, 24580 Silver Cloud Court, Monterey, CA 93940.

After the board approves the plan, each city and county in the region will be expected to submit a “housing element.” The housing element is part of each jurisdiction’s General Plan and is meant to ensure that local zoning allows the level of housing production called for by the state.

Among Santa Cruz County jurisdictions, the City of Capitola has made some of the least progress toward the state housing production goals. Although the city’s housing element allowed zoning to match its projected housing needs, space constraints have limited development.

“It’s really tied to our available land for development,” said Katie Herlihy, the Community Development Director for the City of Capitola. “We’re just under two square miles, and we have less than a dozen vacant lots in the city, so any project really requires a property owner to reinvest into redeveloping their land.”

Capitola may face an even taller order for the next cycle. The city was tasked with zoning for 134 new units between 2015 and 2023. If the state’s new draft goals are approved, Capitola will need to zone for 1,336 new units by the end of 2031.

“We’ll have to look at our existing zoning and see if we can accommodate those additional 1,300 units,” Herlihy said. “If we can’t accomplish it, we’ll have to go through a zoning update and maybe even a General Plan update to show where we’re going to densify to meet those numbers.”

Watsonville has also made less progress than other jurisdictions in the county. At the end of 2021, the city had 302 of 700 housing permits required by the end of 2023. But Carlos Landaverry, housing manager for the City of Watsonville, said he believes the city will meet its RHNA goals for this cycle.

“We’re going to get there,” Landaverry said. “We have a lot of units in the works, so we feel very confident that we will meet those RHNA numbers by the end of 2023.” 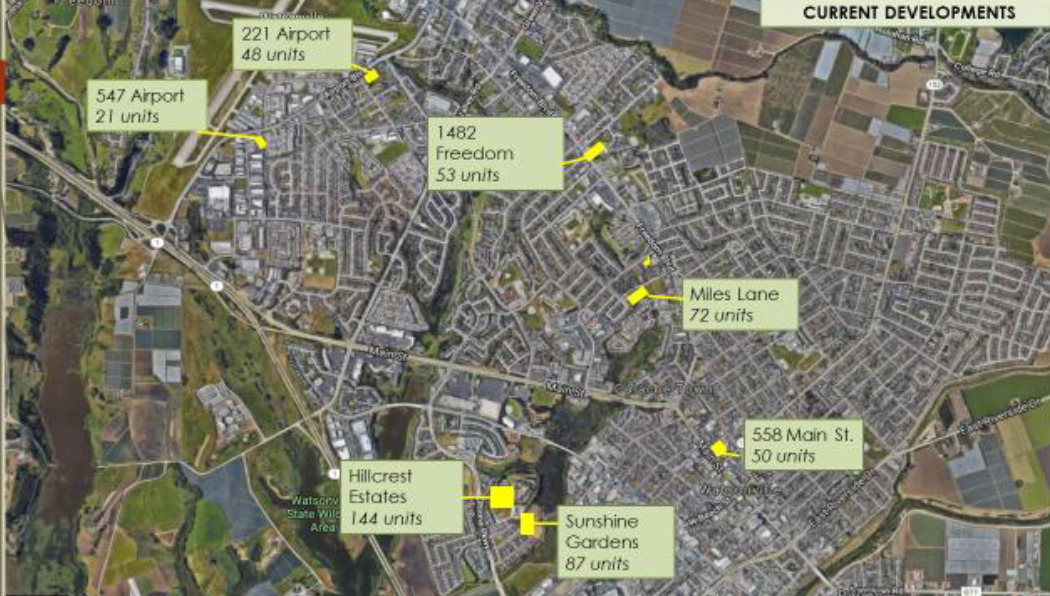 This map shows some of the housing projects in Watsonville that have been approved since 2015 but construction is not complete. (City of Watsonville)

The draft goals for 2031 will require Watsonville to plan for over 2,000 new units. The city’s Community Development Department is looking to densify Downtown Watsonville to accommodate many of those units, according to Landaverry.

“We’ll see how it goes,” Landaverry said. “We know that it’ll be a challenge.”

Santa Cruz, Watsonville, Scotts Valley, Capitola and unincorporated areas of Santa Cruz County have had mixed progress on their housing production goals through 2023.

Each year, local planning departments report progress on affordable housing production to the state. Scroll down to see data reported this spring by local governments to the California Department of Housing and Community Development.

Should I Remodel Or Move?

Things You Need to Know About Rust Penetrating Oil

A Treehouse Companion For An Architecturally-Significant Noosa Home

5 Essentials That Every Homeowner Needs